Article Recalls Life Island’s Oldest Native
This is a short sketch of the life of Mrs. Donald Graham (1776-1887) the oldest person known to have lived on Prince Edward Island – whose age lacked fourteen days of one hundred and eleven years.
The following extract is taken from “Past and Present in P.E.I.”, published in “The Islander” in the early 1900’s.
Longevity on the Island
“We note a case of extraordinary interest near the village of Alma in Prince County on the Western Road.  There died a few years ago, one Mrs. Donald Graham who at the time of her death lacked but fourteen days of being one hundred and eleven years old.  Her maiden name was Catherine Brown, daughter of John Lawrence Brown of Charlottetown.  When she was seven years old, a vicious rooster picked out one of her eyes; but this only seemed to make the other grow stronger and it retained its strength and has to the end of her long and busy life.  Mrs. Graham being able to read and sew without glasses to the day of her death.  She was very vivacious, always in good humour and ready to dare fate and meet her on equal terms, when adversities came, strong in courage and cheerfulness.  Her memory was remarkably good and her reminiscences of the early days on the Island – those days of simplicity of life and iron seriousness of purpose, wherein heroic men and women were laying the foundation of what is in itself a glories little empire – were exceedingly interesting in narration and unquestionably very truthful and were always heard with close attention.”
“At the age of twenty-three, she married Donald Graham who was 25.  From this union there were born eight children, two boys and six girls.  Their names and who they married are as follows:  (1) John married Isobel D. Adams, Lot 11, five children; (2) Marie married Thomas Adams, French River, eight children; (3) Mary Ann married Williams, Sea View, seven children; (4) Helen married John Thomson, Sea View, one child; (5) Catherine married Alexander Bernard, New London, three children; (6) Donald married Elizabeth Coulton, three children; (7) Jane married Artimus Vincent, Wilmot, one child; (8) Isobel married William MacKenzie, Wilmot, seven children.
“Donald and Mrs. Graham lived in Margate all their married life.  Donald died in 1850 at about seventy-seven years of age.  After his death Mrs. Graham moved to Alma and live with her daughter, Mrs. Thompson for fifteen years.  After Mrs. Thompson’s death she moved next door with another daughter, Mrs. Vincent, and stayed there until her death eighteen years later.  When Mrs. Graham was 110 years old (1886), my mother and I drove with horse and carriage from New London to Alma, a distance of sixty miles, to visit Mrs. Graham.  She was living with her daughter, Mrs. Artimus Vincent.  While we were there she walked across the kitchen and carried a home-made hardwood chair and placed it against the opposite without resting.
“Mrs. Graham’s father, Lawrence Brown, married Jean Jamieson December 21, 1770, Lawrence Brown’s Sister, Janet, married Alexander Pickering of New London.  They had six children.  Their oldest daughter, Jennie married John Woodside of Clinton.  They had eight children.  Another daughter, Jane, married William Adams, New London, and they had eight children.
Lawrence Brown’s sister, Mary married James Smallwood of Mt. Stewart and their great-grandson is Joey Smallwood, ex-Premier of Newfoundland.”
I am very grateful to Mr. Neil Matheson who asked for information on Mrs. Graham’s descendants in a news item in the Guardian in May, 1970; also to Mr. Ira Brown, a descendant of Lawrence Brown, and to Miss Rae Barbour who lived next door to the Vincents in Alma.
Ira Brown was born in York in 1882.  He has the trunk which Lawrence Brown brought out from Scotland and each generation has added papers of interest.  He has his signature on his marriage license and several letters.
The following are excerpts from Rev. R.W. Dyer’s 1859-1883 Journals
April 29, 1883 -  Went this morning to Montrose.  Roads very bad.  It made me quite sick to get along.  Had very good audience.  Clark present and many of the Western Road folks, preached from Matt 7: 24, 27.  I enjoyed the Sermon, so I hope did the people.  May it please God to bless His Word.  Had a message from poor old Mrs. Graham 104 years old to ask me to go see her.  She is very poorly – Returned to Alberton for the afternoon Service.  Fine day Mr. and Mrs. Buckerfield present about 70 present.  Had a nice Service preached from James V: 7 verse.  Mrs. Duvar present, all is well thank God.

April 30, 1883 -   Mr. Champion came to see me this morning to say I could have the horse and wagon to go to see Old Mr. Graham an that Mrs. C’s mother could go with me so about 10 a.m. we started.  Roads bad could not go the Line Road nor by the way of Clark’s Mill.  So we went all around by Mr. Hockin’s and round by D. Gordon’s and down the Western Road to the old ladie’s.  We got ther about 12 noon.  How they all were to see me.  Found the old lady in bed.  I had never before found her in bed.  She had been ill and so went to bed.  She may never get up again.  God knows.  Though she had been sick she was quite able to converse about her Dear Saviour being all sufficient to save her soul.  I found her full of hope full of the Gospel Truths and well able to recount them to me.  I was surprised to find her so intelligent.  She could accurately tell me how she and all her father’s family lived 80 years ago and repeat Scripture to a great length.  The beautiful text ask and ye shall receive’’ Fight the good fight of Faith ‘’’  She told me that she was willing to go when it should please her Heavenly Father to call her.  It was truly delightful to find her sensible and able to tell me all about her past life.  She had a pious, God fearing Father.  He being dead yet speaketh in his daughter her Father has been dead over 70 years.  I read to her.  The XIV Chapter of John and made some remarks and then prayed for her commending her to her Saviour.  She said to me Oh if I never see you again I trut that we shall meet in heaven where we shall pain no more.  After this delightful visit to this aged Saint I was asked to go and see another family close by. Here again I found a sick house.  The poor young Mother dying in Consumption pale as death a very sick baby Grandmother and sister poorly. I endeavoured to comfort them from God’s Word which I read to them all. After praying with them and some other Godly counsel which I pray God to bless to all present for Jesus’ sake. I returned to the old ladie’s found her asleep. I made ready for home through mud, water and snow. After the very rough journey I arrived safely at sun down all well thank God.

October 26, 1883 -   After prayers went to see Mrs. Murphy.  Had prayer with the family.  They were glad to see me.  I then went to see Mr. Vincent.  Had a baptism the young child.  From there I went on to see the old, old lady.  Mrs. Graham going I think on a 106 years.  She was so glad to see me.  I was greatly delighted with her.  She is so full of the Spirit.  She trust in God through J.C. and she is full of hope.  I talked to her.  Read to her and prayed for her.  Then she repeated a long, long piece of poetry very nicely which she had learned about 90 years ago.  She is waiting for her Heavenly Father to call her home.
Posted by Carter W. Jeffery at 10:03 AM No comments:

Posted by Carter W. Jeffery at 9:30 PM No comments:

Peacefully at the Prince County Hospital, Summerside, with her family by her side, on Sunday, January 10, 2016, of Blanche Mildred Rennie, of Dock Road, Alberton, age 94 years. Beloved wife of the late Ralph Hampton Rennie. Born at Elmsdale on October 26, 1921, she was the daughter of the late Basil and Jemima (nee Gibbs) MacNeill.
Loving mother to: Marilyn (Charles) Ashley, of Alberton; Blois (Nola), of Dock Road, Gary (deceased) (Connie), of Dock Road; Ellen (Doug) MacLeod of the Brae; and Troy (Maxine), of Union. She is survived by 18 grandchildren, 26 great-grandchildren and five great-great-grandchildren. She is also survived by sisters: Pauline (Bill) Hutchings, of Mississauga, Ont., and Carole Cole of Toronto, Ont. Also survived by a sister-in-law, Olive MacNeill, of Toronto.
She was predeceased by siblings, Claude, Leigh, Thane, Betty, Olive, Ruth, Hazel and Ethel.
Resting at the Rooney Funeral Home, Alberton. Visiting hours Thursday, 2 to 4 p.m. and 7 to 9 p.m. Funeral Friday afternoon from the Elmsdale Church of the Nazarene, for funeral service at 2 p.m. Interment in the Church cemetery.
As an expression of sympathy, memorials to the Western Hospital Equipment Fund or to the Prince County Hospital, Summerside, would be gratefully appreciated.
Posted by Carter W. Jeffery at 9:51 AM No comments:

At the Dartmouth General Hospital on Sunday, November 6, 2016, with his loving family by his side, of Alden Ervin Rennie, of Dartmouth, age 76 years, beloved husband of Dianne (nee Campbell) Rennie. Born at Alma, PEI, on January 12, 1940, he was the son of the late Arthur Allison and Lulu Belle (nee Williams) Rennie.
Loving father of Janet (Jason) Shortt of Surrey, BC, and Jason (Penny) Rennie of Oakfield, NS. Cherished grandfather to Alex Lassaline, Ella Shortt, Kieran Rennie and Kacee Rennie. Dear brother to Arlene Rennie of Alma, PEI, Sherrill (Fred)Horne of Bloomfield Dale (Annette) Rennie of Alma, PEI, Ronnie (Joan) Rennie of Alma, PEI,  and Karen (Leonard) McNeill of Elmsdale, PEI. He is also survived by brothers and sisters-in-law, David (Edith) Campbell of Alberton, PEI, Elizabeth (Hector) MacLeod of Alberton, Elda (Robert) Culbert of Alberton, Gwen (Rick) Hardy of Cascumpec, PEI, Rob (Debbie) Campbell of Stratford, Margaret (Gary) Gallant of Summerside, PEI, Nina (late Donald) Campbell of Charlottetown, PEI, and Douglas Rooney of Markham, Ont. He will be sadly missed by his many nieces and nephews. He was predeceased by his parents, Arthur and Lulu, his mother and father-in-law Robert and Georgie (Lewis) Campbell, a sister Joanne Rooney and a brother-in-law Donald Campbell.
Alden was employed for 19 years with the Bank of Nova Scotia, 22 years with the Province of Nova Scotia in the Department of Justice and served 22 years as Registrar of the SEDMHA Tournaments.
Resting at the Rooney Funeral Home, Alberton, PEI. No visiting hours by personal request. Funeral Saturday afternoon, November 12th, from the E. Gerald Rooney Memorial Chapel, for funeral service at 3:30 p.m. Interment in the Elmsdale United Church Cemetery.
If so desired, memorials to the Heart and Stroke Association would be gratefully appreciated.
Posted by Carter W. Jeffery at 9:29 AM No comments: 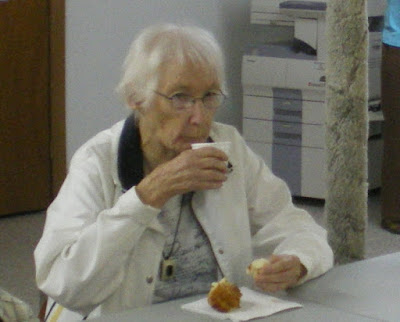 Edna was a faithful member of St. Peter’s Anglican Church, Alberton
-here she is enjoying a cup of tea in fellowship following the morning service.

1923-2016
At the Rev. W.J. Phillips Residence, Alberton, on Thursday, August 18, 2016, of Edna Mary Trainor, of Alberton, age 93 years. Born in Alma on June 4, 1923, she was the daughter of the late Pte. Alfred and Ida May (nee Vincent) Trainor.
She was predeceased by a sister Myrtle Brooks. Resting at the Rooney Funeral Home Alberton. No visitation by personal request. A graveside service to be held Tuesday morning, August 23rd, from Holy Trinity Anglican Cemetery, Alma, at 11:00 a.m., Rev. Darroch Fagan officiating.
Memorials to Holy Trinity Anglican Cemetery would  be gratefully appreciated.
Posted by Carter W. Jeffery at 9:31 AM No comments: 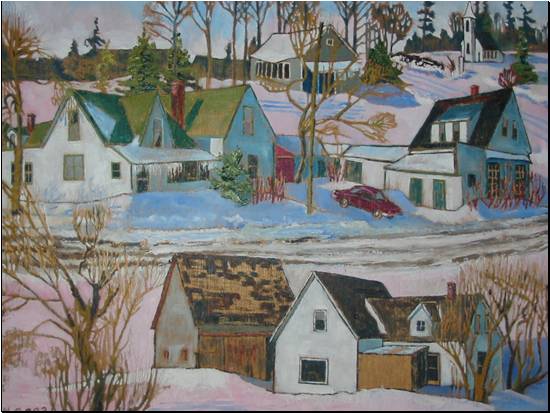 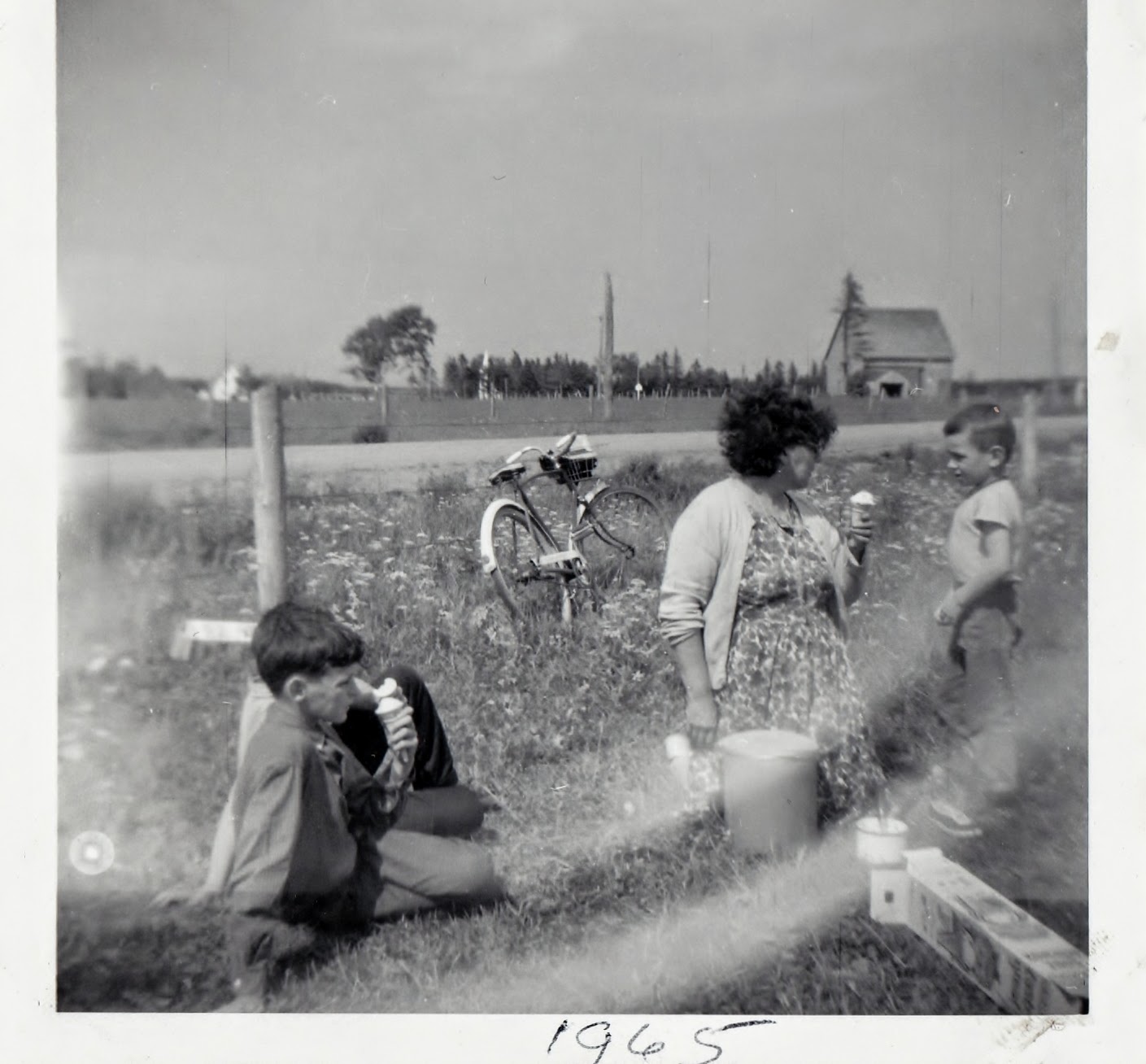